Parents and carers were also invited to undertake the online surveys. 291 parents/carers responded to the surveys in total. These surveys were primarily based around parents/carers thoughts on children going out to play, the suitability of the local area for playing and how the pandemic affected their children’s play.

The below table shows how many children the parents have who participated in this survey, with the majority having between 1-2 children.

The parents were questioned about how many hours of play they allow their children to have a day. As seen below, a majority answer was ‘1-3 hours’ with 51.39%. This is closely followed by 48.26% allowing their children to play for 4+ hours.

Next, the participants were questioned on if their children are allowed to play out without adult supervision. Almost half of parents said ‘Not at all’. 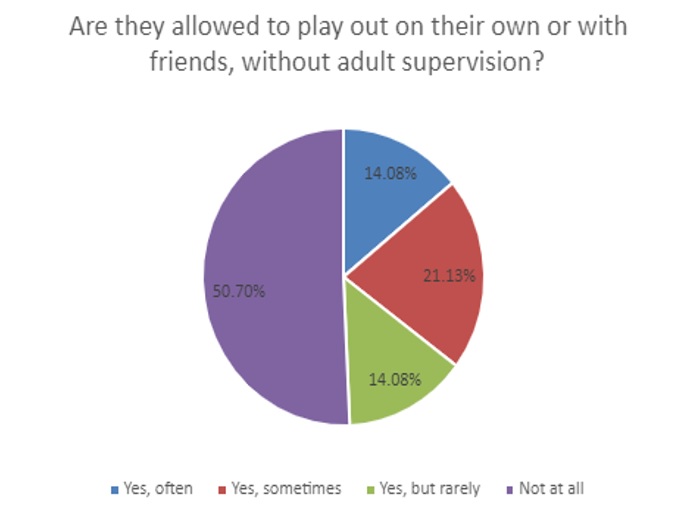 Following up from this, the survey then questioned how often the children go out to play, as seen below. 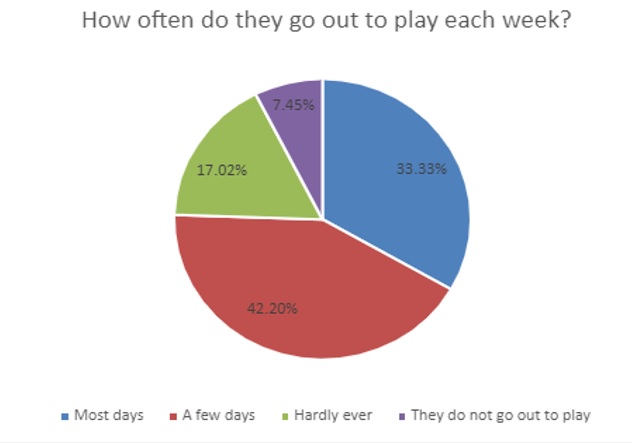 As seen below almost half of parents allow their children to play with friends. 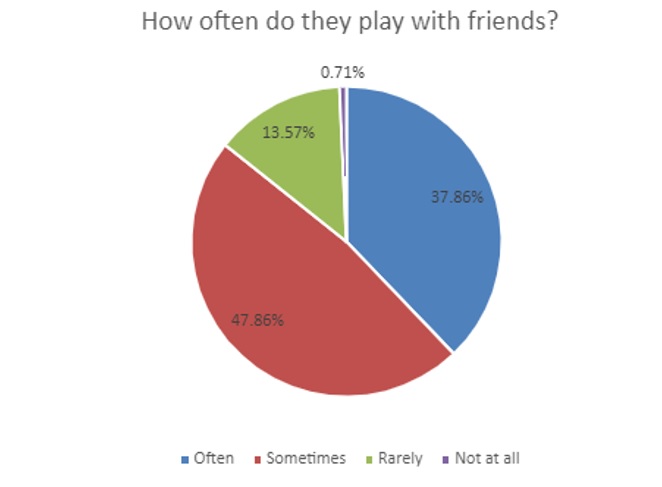 Feelings on safety of children in Pembrokeshire

The below graph shows respondents stats when asked ‘how safe do you feel about your child (ren) going out to play?’ the majority of the parents responded with the neutral option, as seen below with 38.57%. Secondly, 30.00% responded with the ‘safe’ option. In addition, 18.57% said they feel ‘unsafe’ and 8.57% said ‘very unsafe’ 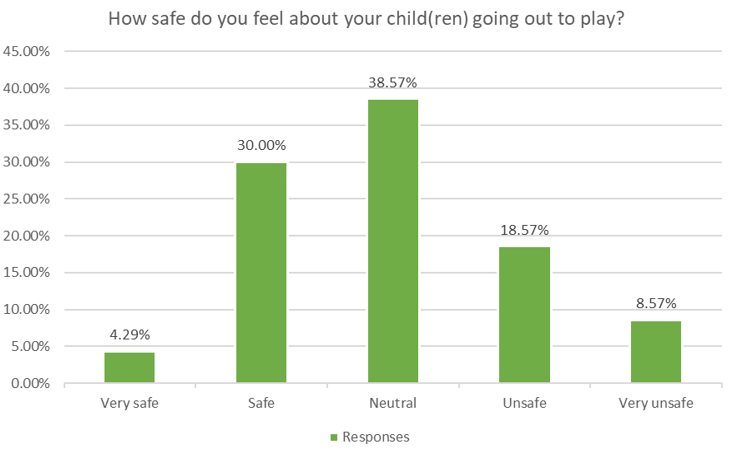 If ‘very unsafe’ was chosen, the participants were prompted to give an answer as to why they selected this option. Six of the respondents mentioned their children are too young, once specifically stating:

“They are young (not long turned 4 and 6). 6-year-old has ADHD and no real awareness of danger. It is too dark to play currently. There is also Covid sweeping throughout the area currently. They attend clubs in the evenings - acrobatics, ballet, football, rugby, kung fu, Beavers. At weekends, they play with their cousins on the farm or at the beach, etc. They also attend afterschool, holiday club in Narberth, and play there. This can include trips to castles, beaches, etc.”

Another six responses consisted of comments made about ‘busy roads’ or ‘traffic’. Expanding on this, two participants mentioned lack of safe pavements.

The effects of COVID-19 on play sufficiency

The table below shows parents’ feelings on their child’s safety when asked ‘Has COVID-19 affected how safe you feel about your children going out to play’. A large majority said no, leaving around a fifth who answered yes.

The respondents who replied with yes were asked to expand on this with a comment on why. Some parents responded with comments about not being able to mix or socialise during the lockdown:

“(The children) have missed out socially so haven’t socially matured as soon as they would have, as (they) have been kept home more.”

Another five parents referred to their child being vulnerable to catching COVID-19, with statements such as:

“We can control our household contacts but not others.”

“Concerned about them catching covid”.

Expanding on this, the next question was ‘How has COVID-19, lockdown and restrictions affected your child (ren)’s play?’ 14 of the 185 responses on this question mentioned that they did not feel like their child was affected. Quoting one individual:

“No change if anything they had more time to play in the garden. There is nowhere in our village for them to play safely.”

“During lockdown we had no sport groups, or training which affected his mental health.”

“Lockdown was hard for the children - their sports stopped, along with regular physical exercise and social interaction with their peers … one of my children went from doing sports 5 times a week to nothing. Luckily my daughter has got a pony so this helped with her mental well-being as well as her physical wellbeing.”

A huge portion of responses were also highlighting a lack of socialising with other kids, Other comments include:

The survey included a multiple choice question asking ‘What type of places do you allow your child (ren) to play or hang out?’ Parents could choose as many options as applicable.

Results were in line with the children’s survey, with at home/garden or a friend’s home/garden being the most popular. Over three quarters of parents also selected ‘in a play area with swings, slides and other play equipment’, however several parents also commented that play areas need refurbishing or are unsafe.

If somewhere was not listed, the parents were given a chance to describe areas of play. A few examples include:

Participants were asked what their children’s favourite activities are; football was a common answer with 59 participants responding with this. Other sports such as rugby, swimming and scooting were also popular. Six parents described that their child does imaginative or pretend play. Another popular answer was skating, with 19 parents suggesting activities such as ‘Skateboarding, roller skating’ and ‘the skate park (however it is closed at the moment as was judged unsafe)’. 13 respondents also said their children enjoy ‘soft play areas’.

In contrast, parents were asked to write what they thought were the least popular activities among their children. 18 respondents mentioned that sports are not popular among their children, nine of these specifically mentioning football. Seven participants said the park is not very popular and another four mentioned Skate parks, one specially stating; “My children feel uncomfortable at skate parks”. Five answers referred to their children not enjoying indoor/soft play areas. A few more answers include:

A simple yes or no question was asked to find out ‘Does your child (ren) have difficulty in participating in certain activities? (e.g. because of a disability)’. If yes was answered the respondent was prompted to elaborate.

It is clear from the above table that the majority do not have any difficulty; however, the 35 respondents who ticked ‘yes’ gave notable reasons. Two main themes identified are ALN and mental health issues, with nine of the respondents mentioning that their child has autism, two mentioning ADHD and other comments such as:

“1 of my children has ASD and sensory processing difficulties”

The chart below displays results from a question on parents’ satisfaction with play provision. 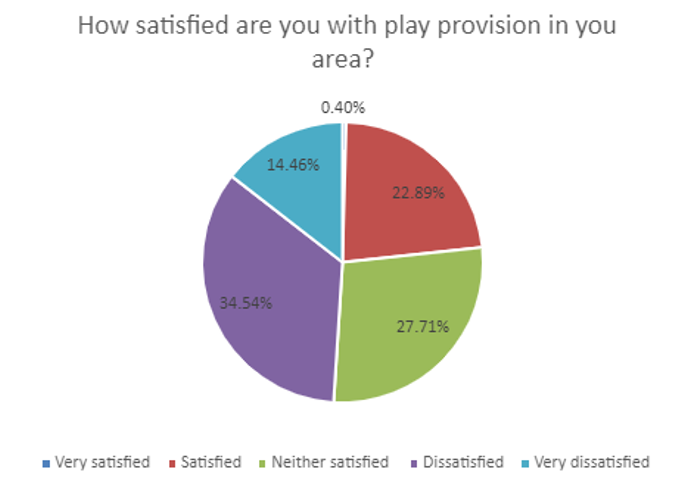 Next, the parents were given the chance to say what provision they would like to see provided in their area. 14 parents would like to see 3/4G pitches for football and/or rugby. Eight parents mentioned such comments about playgrounds:

“A fully equipped playground as seen in nearby villages. Big wooden structures like the one in Templeton, or Narberth.”

“Would like to see the playground updated. The skate park is currently closed due to ramps not being safe. Also, some nets would be good on the basketball hoops in the MUGA (Multi Use Games Area).”

Parents were asked if there is anything, the LA could do to improve play opportunities. The below table shows parents responses.

The 52.23% who said yes expanded on their answer and gave reasons such as:

“Improve the parks. Free parking for locals at the beaches.”

11 of the responses involved either fixing or adding new skate parks, eight respondents referred to a new Astro turf football pitch. 27 parents also believe the local parks need updating. Comments on how schools could be improved involved statements such as:

“More play opportunities should be provided at school particularly during winter when I find children return from school full of energy and needing exercise and its dark early so difficult to take them out. This is worse on wet days when children have not been outside during breaks”.

“Improved sporting facilities and teaching in some primary schools. Not enough focus on exercise in my son’s school.”