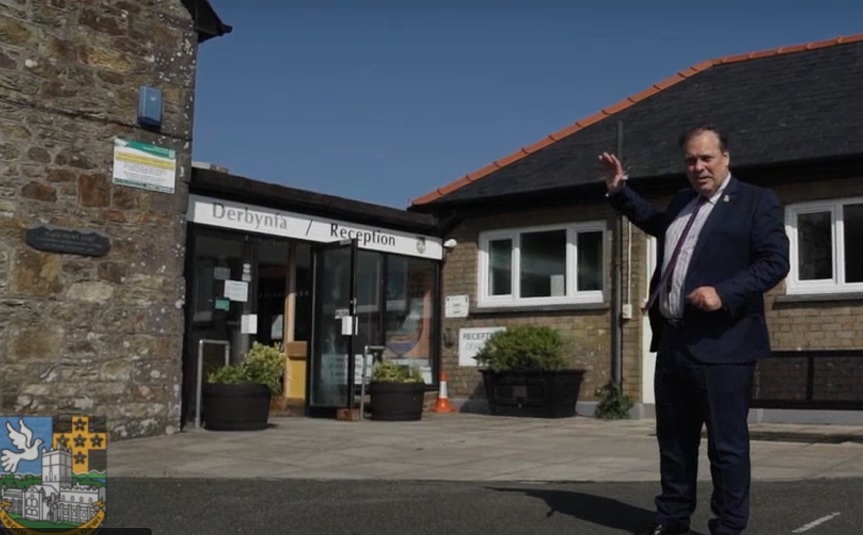 Pembrokeshire schools have risen to the challenge of supporting the transition of Year 6 learners to secondary education, despite the disruption caused by the Covid-19 virus.

Normally, all Year 6 pupils (those in the last year of primary school) spend two days in late June/ early July at the secondary school which they are due to move up to the following September.

The transition days help children to prepare for the new world of secondary education by enabling them to become familiar with the layout of the school site, meeting their form teachers, negotiating the canteen and more.

The two days are complemented by other transition activities throughout Year 6 such as taster days, visits by secondary teachers to schools in their primary cluster, and classroom discussions.

However, as Acting Director for Children and Schools Steven Richards-Downes explains, the return to schools on the 29th of June may affect the transition processes of individual schools.

“The Covid-19 pandemic has made us think very differently about the approach to transition from primary to secondary school this year,” he said.

“I am delighted that our secondary schools have responded with enthusiasm to the challenges that face transition learners in Year 6, as well as Years 9 and 11.

“We have provided our learners with a wide range of opportunities and all schools have developed new and innovative approaches to transition.”

Some examples of the ground-breaking preparations taking place include Ysgol Penrhyn Dewi’s online approach to transition, featured recently in the Times Education Supplement.

As well as filming a virtual tour of the school, staff are in the process of launching their annual transition project and have plans to run a live virtual transition day. “We didn’t want the children who are coming to us to feel as though they’d missed out," said Headteacher David Haynes. “In fact we want to make sure they feel as if they’re part of something really special.”

Also creating a digital transition experience is Haverfordwest High VC School who have launched a new website for the pupils due to join in September, which Headteacher Jane Harries said has received an ‘overwhelmingly positive response’.

As well as information on a variety of subjects, there are welcoming videos by staff and pupils, introductions to learning areas and a virtual tour of the site by Head of Year 7, Lauren Davies. “The video is very much focused on the pupils themselves and making them feel comfortable and enthusiastic about moving up in September,” she said.

At Milford Haven School, a welcome video filmed has been with Headteacher Ceri-Ann Morris together with a virtual tour of the school site by Strategic Lead Rachel Mansell.

A virtual google classroom has been set up for over 200 pupils, while all prospective pupils have already received their welcome letter from the Headteacher. A dedicated website has been also transformed to include letters from current pupils to the new learners. Ms Morris explains in her video about the launch of the virtual transition project on 1st June: ‘Our transition this year is slightly different and there will be a range of activities created in collaboration with our cluster of schools’.

At Ysgol Bro Gwaun, pupils have been encouraged to send in their pen-portraits and have been using Google Classroom to provide daily updates and promote communication and wellbeing amongst the year-group.

“We have been using ‘Flip-Grid’ to introduce staff and to promote further interaction”, said Head of Year 7, Mrs Emma Bowen who has been overwhelmed by the pupils’ willingness to participate and their creativity when using the e-learning platform.

Year 6 pupils due to join Ysgol Harri Tudur/ Henry Tudor School in September will be able to take part in transition visits to the school over a number of agreed set days with current primary schools from June 29th to include a school tour, as well as working on transition materials in their primary schools.

The school is also providing a video for Year 6 pupils, parents and primary schools.

Ysgol y Preseli contacted all prospective Year 6 pupils and their parents to assess how the school could help the transition process during the closure period. Based on pupils’ responses the school has created a range of help videos, a transition blog, weekly digital learning activities and designated Facebook page focusing on transition.

Deputy Headteacher Iola Phillips said ‘We have listened to pupil and parental voice and have adopted an innovative approach using the latest digital technology to create resources which will help pupils look forward to the process of joining us at Ysgol y Preseli. We have placed their well-being at the heart of all of the resources created.”

At Ysgol Caer Elen, a transition pack has been sent to the feeder primary schools as well as being shared on the school’s Facebook, Instagram and Twitter pages. The school has also created a TEAM group for all Year 6 pupils in order to share the pack and other resources.

“We are also working towards ensuring a smooth and successful transition for all prospective Year 6 pupils in Ysgol Caer Elen,” said Gareth Owens, Assistant Headteacher.

Staff at Ysgol Greenhill have been working quickly and creatively to support pupils in Year 6 with making a positive transition to secondary school while minimising disruption and focusing on pupils’ well-being.

Pupils can access the school’s ‘Google Classroom’ which has already seen a successful virtual music transition event, and the school has provided a range of curriculum related activity using the online ‘Greenhill Transition 2020’ including numeracy, literacy, and science challenges.

Mrs Victoria Thomas, KS2-3 transition leader, has started holding Microsoft Teams meetings with Year 6 pupils and staff, and the school is announcing the next phase of Year 6 Virtual Transition soon. An exciting virtual transition video is also being created.

All school websites (primary and secondary) can be accessed by viewing the following page: