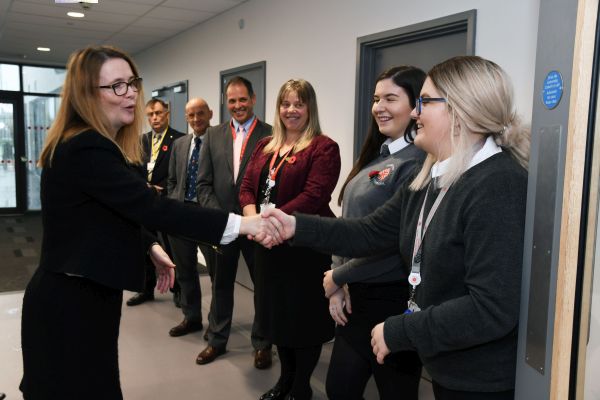 The £38.3 million school was funded jointly by Pembrokeshire County Council and the Welsh Government as part of the 21st Century Schools and Education Programme.

It represents the largest investment in the programme to date by the County Council, which commissioned construction company Bouygues UK to carry out the two-year building project.

Mrs Kite said the opening of the new school was a significant milestone in the history of education in the Pembroke area and an important fresh start for staff and pupils, who had been very positive in their feedback.

“We have a new uniform, new school day, school name, logo and motto, and pupil voice has been at the heart of our decisions,” she said.

“We hold a belief that all pupils and students have the ability and potential to achieve beyond the sky’s limit. Our Pembrokeshire children have the capacity to stand on the world stage alongside any of their peers.”

Following a wonderful performance by the school choir and orchestra of Adiemus by Welsh composer Karl Jenkins, Mrs Williams was invited to officially open the school.

She said: “I am absolutely delighted to open Ysgol Harri Tudur today – a £38.3million project, jointly funded by Pembrokeshire County Council and Welsh Government through our 21st Century Schools Programme.

“This is the most ambitious school building programme since the 1960s and will see an overall investment of £1.4billion. Our pupils deserve to have the best learning environment for their development and Ysgol Harri Tudur certainly delivers this.

“I would like to thank everyone involved, and wish the teaching staff and pupils the very best of luck for their future in this exciting new school.”

Mrs Williams was then given a guided tour of the school by Ms Kite and principal student Maria Janota where she met students from various classes and chatted to them about their work.

Located off Ferry Lane, the school has been built to the highest environmental standards and is a welcoming place with sheltered and secure surroundings. It links pedagogy and space to provide areas for instructional learning, practice-based learning and self-directed and informal learning.

Pupils and staff also have access to state-of-the-art ICT provision that permit a wide range of choice to resources, accessed in a flexible way. 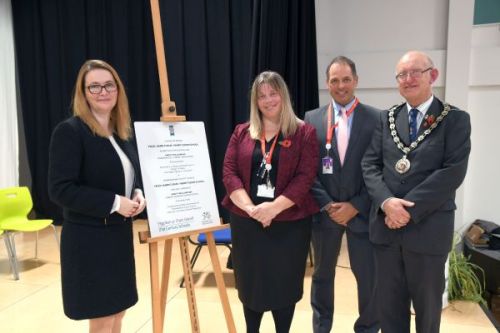