What will MH:EK seek to do?

Can you explain MH:EK in a bit more detail?

Who are the MH:EK team?

What do you believe will be the benefits of MH:EK?

What are the advantages of the MH:EK project?

Are there any emerging themes from the project?

Can you explain a little more about the MH:EK Hydrogen Fuel Cell Electric Vehicle (HFCEV) Trial?

Can you explain a little more about the Hybrid Heating System trial?

What are the advantages of Hydrogen as an energy source?

What are the challenges of Hydrogen as an energy source?

Can you explain a bit more about Hydrogen?

A Systems Architecture is mentioned, what’s that?

Why use a Systems Architecture Approach

MH:EK is a two-year £4.5 million project, completing in 2022, exploring what a decarbonised smart local energy system could look like for Milford Haven, Pembroke and Pembroke Dock. The project will explore the potential of hydrogen as part of a multi-vector approach to decarbonisation. Central to the project, and to achieving net-zero, is a commitment to engage with the community and local industry, providing insight and opportunities for growth.

The name ‘Energy Kingdom’ comes for Port of Milford Haven’s ‘sense of place’ report, which aims to explain the history, present and future of energy operations in the UK’s biggest energy port.

﻿What will MH:EK seek to do?

Our ambition is to gather detailed insight into the whole energy system around Milford Haven, to identify and design a future smart local energy system based on a truly multi-vector approach (heat, electricity, transport) and comprehensive energy systems architecture.

﻿Can you explain MH:EK in a bit more detail?

The project aims to output:

﻿Who are the MH:EK team?

The project is broken down into work packages (WP’s) with each partner leading and supporting on specific elements – the work allocation is not set in stone and partners are flexible in crossing resources into other work packages – e.g. ORE Catapult and Arup are now heavily involved in WP 9 and Wales & West Utilities are supporting with WP 6:

﻿What do you believe will be the benefits of MH:EK?

We believe the project holds promise in showcasing the far-reaching benefits of low carbon energy. It has the potential to lead the way and become the first of many Smart Local Energy Systems supporting our local communities, Wales and the UK in reaching the legislated target of net zero greenhouse gas emissions by 2050.

﻿What are the advantages of the MH:EK project?

MH:EK is one of the chosen “Detailed Design” projects within the Prospering from the Energy Revolution (PfER) programme of works funded by Innovate UK as part of their Industrial Strategy Challenge Fund (ISCF) with match funding provided by some project partners.

﻿Are there any emerging themes from the project?

Yes. The MH:EK team have some emerging asks of Government, such as:

﻿Can you explain a little more about the MH:EK Hydrogen Fuel Cell Electric Vehicle (HFCEV) Trial?

We are constructing a hydrogen electrolyser and hydrogen refuelling station at Milford Haven Waterfront. We will fuel two Riversimple ‘Rasa’ HFCEVs (Riversimple) which we will use to demonstrate the viability of hydrogen refuelling at a smaller, local scale as well as demonstrating consumer demand is critical at this point of the whole green energy market development. As examples, MH:EK aims to engage the local community and the public sector fleet owners in the new green hydrogen transport system demonstration. The Rasa’s will be used for business mileage by the maintenance teams, NHS district healthcare workers and showcased to regional public sector agencies and community organisations. MH:EK aims to take the Rasa car to local schools and provide educational packs within our Sustainable Schools Award Scheme and in tandem with other partners at Eco Schools and Pembrokeshire Coastal Forum Education team. 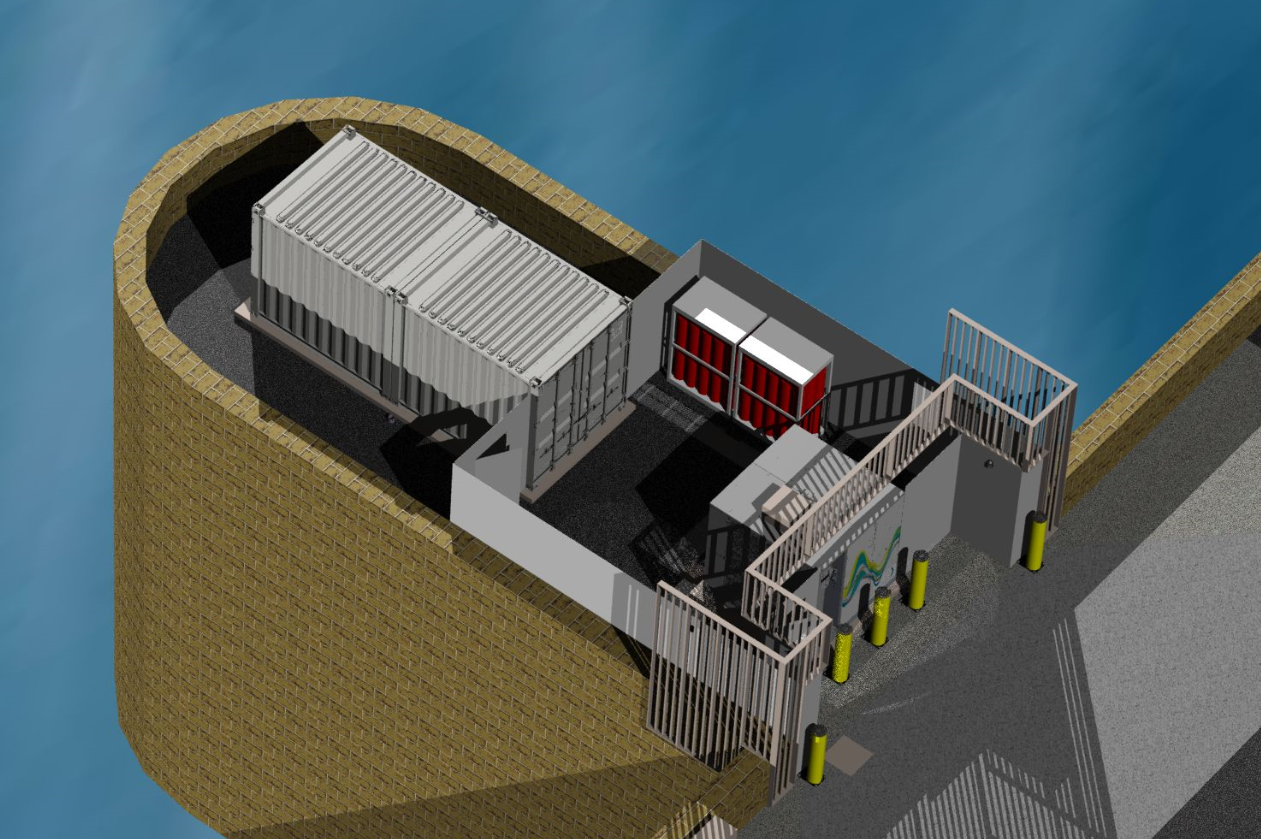 The MH:EK detailed design project is about the whole system approach and interconnectivity of transport, heat, gas and electricity using hydrogen from renewable energy sources.

﻿Can you explain a little more about the Hybrid Heating System trial?

We are installing a smart hydrogen-ready hybrid heating system in an operational building belonging to the Port of Milford Haven. This is a first of its kind trial combining principles of hybrid heating with hydrogen in a commercial setting.

The new heating system will comprise an air source heat pump paired with a new gas boiler capable of hydrogen combustion. Smart heating controls will be used to manage the system which will make best use of local renewable energy to run the heat pump and switch to gas heating when it is very cold or when renewable energy isn’t available. A boiler will be trialled on-site to demonstrate the combustion of hydrogen as a clean heating fuel. Numerous trials will take place to demonstrate the heating system operating in a number of modes; lowest carbon, lowest cost, etc.

﻿What are the advantages of Hydrogen as an energy source?

﻿What are the challenges of Hydrogen as an energy source?

A fuel cell is a device that generates electricity through an electrochemical reaction, not combustion. In a fuel cell, hydrogen and oxygen are combined to generate electricity, heat, and water. Fuel cells are used today in a range of applications, from providing power to homes and businesses, keeping critical facilities like hospitals, grocery stores, and data centers up and running, and moving a variety of vehicles including cars, buses, trucks, forklifts, trains, and more.

Fuel cell systems are a clean, efficient, reliable, and quiet source of power. Fuel cells do not need to be periodically recharged like batteries, but instead continue to produce electricity as long as a fuel source is provided.

A fuel cell is composed of an anode, cathode, and an electrolyte membrane. A typical fuel cell works by passing hydrogen through the anode of a fuel cell and oxygen through the cathode. At the anode site, a catalyst splits the hydrogen molecules into electrons and protons. The protons pass through the porous electrolyte membrane, while the electrons are forced through a circuit, generating an electric current and excess heat. At the cathode, the protons, electrons, and oxygen combine to produce water molecules.  As there are no moving parts, fuel cells operate silently and with extremely high reliability.

Due to their chemistry, fuel cells are very clean. Fuel cells that use pure hydrogen fuel are completely carbon-free, with their only byproducts being electricity, heat, and water. Some types of fuel cell systems are capable of using hydrocarbon fuels like natural gas, biogas, methanol, and others.  Because fuel cells generate electricity through chemistry rather than combustion, they can achieve much higher efficiencies than traditional energy production methods such as steam turbines and internal combustion engines. To push the efficiency even higher, a fuel cell can be coupled with a combined heat and power system that uses the cell’s waste heat for heating or cooling applications.

Fuel cells are also scalable. This means that individual fuel cells can be joined with one another to form stacks. In turn, these stacks can be combined into larger systems. Fuel cell systems vary greatly in size and power, from combustion engine replacements for electric vehicles to large-scale, multi-megawatt installations providing electricity directly to the utility grid.

Benefits of fuel cells at a glance:

﻿ Can you explain a bit more about Hydrogen?

Hydrogen is the most abundant element in the universe, though it is not found naturally on Earth. Hydrogen must be extracted from other sources. In its purest form, hydrogen is a non-toxic colourless and odourless gas.

Hydrogen (when used as a fuel), like electricity, is an energy carrier rather than an energy resource. Both electricity and hydrogen can be produced from all energy resources available (including, natural gas, petroleum products, coal, solar and wind electrolysis, biomass, and others). Hydrogen and electricity can be generated from greenhouse gas-neutral sources, addressing climate change and urban air quality problems. As with electricity, hydrogen can also be produced from sustainable domestic and renewable energy resources, such as wind or solar-powered electrolysis, which enhances our long-term energy security.

Millions of metric tons of hydrogen are produced annually in the United States, which is enough to fuel tens of millions of FCEVs. The current primary uses for hydrogen, however, are for the petroleum, ammonia for fertilizer, chemical, and food industries.

Today, 95% of the hydrogen produced in the United States is made by industrial-scale natural gas reformation. This process is called fossil fuel reforming or steam methane reformation (SMR) and uses natural gas and steam to generate carbon dioxide and hydrogen. We expect to use hydrogen produced from renewable energy, like wind power, and from methane reforming – but only with carbon capture and storage, os that all hydrogen is complaint with a net zero energy system.

Hydrogen has been safely produced and used around the globe for nearly half a century. As with every fuel, safe handling practices are required but hydrogen is non-toxic and does not pose a threat to human or environmental health if released.

Hydrogen systems are as safe, if not safer, than conventional fuel systems, including gasoline and natural gas. Hydrogen is ubiquitous in the universe. On Earth, hydrogen is a molecule consisting of two atoms and has a propensity to bond with other molecules.

Hydrogen has been safely used by many different industrial sectors for more than 50 years. Ten million metric tons of hydrogen is produced every year for use in a range of industrial applications such as chemical, refining, electronics, and pharmaceuticals. Hydrogen can create clean energy and stores energy from renewables, is used to make fertiliser, and makes consumer goods and food more shelf-stable.

In the transportation sector, hydrogen has been safely used as a fuel for cars, trucks, buses, forklifts, and other applications.

﻿A Systems Architecture is mentioned, what’s that?

The Milford Haven: Energy Kingdom (MH:EK) project is using a novel, systematic engineering approach that the Energy Systems Catapult (ESC) describe as a hydrogen based 'Systems Architecture'. This aims to capture every possible scenario of hydrogen use and provide a financially stable, mutually beneficial environment to allow business to flourish.

The systems architecture achieves this by mapping the hydrogen system fundamental building blocks and interactions between them, these include the consideration of the physical components and sub-systems, market structures and trading platforms, policy and regulation barriers and opportunities, digital interfaces and commercial structures and arrangements.  The architecture is developed to be a technology agnostic local hydrogen system that can manage the supply, transport and demand for current and future hydrogen use cases.  It will enable greater flexibility for new entrants into the system as technology changes and policy and regulation matures over time.

﻿Why use a Systems Architecture Approach

A more traditional agile development approach is a brilliant technique for bottom-up innovation for so many of the things we experience in our lives. However, we also recognise that large infrastructure projects, whether digital or physical in nature are first designed.  To use an analogy no-one expects for a space shuttle to emerge from successive design sprints, however the component parts can be developed through a more ‘agile’ approach once the structure and interfaces of the space shuttle have been first described.

Therefore the identification of the high level components and their required interactions within a system will allow the more detailed activity to be undertaken within each component (such as the supply, transport or demand components) with greater confidence of success and less wasted effort.