This CSA report reflects the specific context for childcare provision in Pembrokeshire, aligned to the three Upper Super Output Areas (USOAs) that make up the county. A full summary of key findings from the demographics research and consultation can be found in the subsequent sections.

Pembrokeshire is a predominately rural county in the south west of Wales, bordered by Carmarthenshire to the east, Ceredigion to the northeast, and the rest by sea. The most recent population data from the Office of National Statistics (ONS) shows that every age group except for 12–18-year-olds is expected to fall in Pembrokeshire between 2020-2026. There are forecast to be around 600 fewer 8–11-year-olds residing in Pembrokeshire between by 2026, and overall, a decrease of approximately 360 children aged 0-18 residing in the county during this same period. These figures suggest that demand for Early Years childcare may fall in the coming years in Pembrokeshire.

32.1% of the Pembrokeshire population describe themselves as fluent in Welsh. Pembrokeshire is among the least ethnically diverse areas in Wales, with a high proportion of pupils aged 5 and above identifying as white British at just over 93%. Comparatively, only 3% of pupils identify as being from a non-white background.

The effects of COVID-19 and Brexit may lead to a drop in the number of people coming to Wales and possibly lead to more people leaving rather than entering, resulting in a negative net-migration. The possible reasons for this are numerous. Firstly, the Oxford Migration Observatory contends that as the UK’s new Points Based Immigration System places greater restrictions on the number of lower-skilled EU workers that are allowed to enter the UK, this will likely contribute to a drop in migration which could affect LAs such as Pembrokeshire.

Pembrokeshire’s Local Development Plan proposes development of over 7,000 new dwellings set to be constructed and eventually occupied in each ward or settlement in Pembrokeshire. Whilst there are significant variations in how much expected housing capacity there is likely to be in each area, all wards and settlements are projected to see an increase in the number of dwellings constructed in them by 2024. While this scale of house building will probably not result in a significant increase in demand for childcare across Pembrokeshire, where significant developments are taking place of a type likely to attract families with young children, discussions within the local authority are needed to ensure that the impact on the childcare market is assessed.

Pembrokeshire was found to have a higher number of pupils with a statement of Special Educational Needs, than the neighbouring county of Ceredigion, but lower than Carmarthenshire. Overall, 2.24% of Pembrokeshire pupils have statemented ALN.

Summary of level of provision

At the time the SASS was completed, the level of supply of childcare in Pembrokeshire was as below: 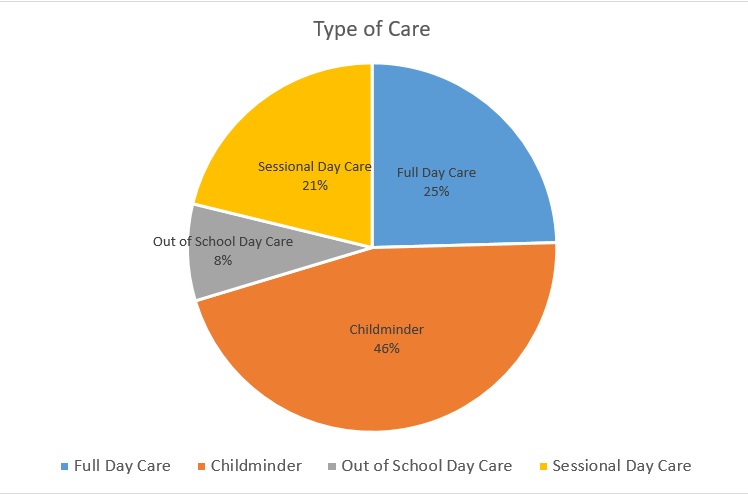 Out of school care

As of autumn 2021, there were 63 children with a registered ALN or disability using a registered childcare place in Pembrokeshire, with the most prevalent needs being speech and language, autism and physical disability. The majority of providers are trained or qualified to care for children with ALN.

COVID-19 has had a significant impact on services generally over the past 2 years, with the closure of non-essential business and people working from home. Many childcare providers closed during the pandemic and whilst now reopen, the reduced numbers and demand during this time will still have an impact on those providing services for some time. 71% of responding full and sessional day care providers, 55% of childminders, and 100% of out of school providers, felt that COVID-19 had impacted the sustainability of their business, with many having to close at the outset of the pandemic. Many providers were unsure of the impact on financial sustainability that the pandemic has at, at the time the data was collected. 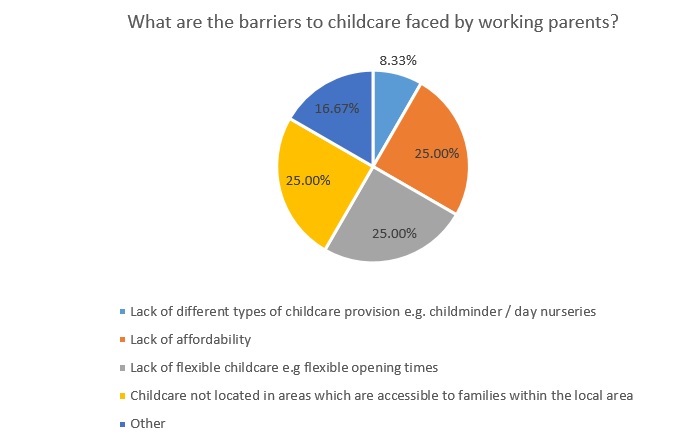 For families with children who have ALN or disabilities, affordability was listed as the main barrier to childcare, with supply of childcare, quality of provision, flexibility and accessibility all listed as secondary issues. in terms of barriers for Welsh-medium speaking families, a lack of childcare in accessible areas, alongside lack of Welsh medium childcare were noted as the main issues.

451 responses were received from parents/carers across Pembrokeshire. Whilst the number of parent/carer responses increased by 35% since the previous CSA, the respondents to the online survey represent only a small proportion of the county’s parents and therefore the limitations of the data analysed below should be acknowledged.

From the research conducted throughout the CSA, the following emerging gaps in the childcare sector in Pembrokeshire have been identified. An Action Plan will be developed after the consultation period addressing these gaps and a summary of proposed actions will be included in the final version of this report.

Although the quality of provision is widely recognised as being high, many parents are struggling to access affordable and local childcare that allows them to work full-time. Some parents spoken to even noted having to move house to find sufficient childcare and found difficulty finding suitable providers through the council; this was largely done through word of mouth. Flexibility is an issue, with many parents having to rely on family or informal childcare to meet the gap in provision. The number of childminders generally has reduced in the county, with several leaving the profession over the past few years or planning to leave the profession shortly.

Lack of awareness around the Childcare Offer

Across Pembrokeshire, childcare settings currently offer Childcare Offer places to 3-4-year-olds, yet less than half of these places are currently filled. Providers could be better supported to market this provision to parents and deliver this offer, and more awareness raised of childcare support available to parents, especially those on low-income looking to increase their working hours, those working full-time and struggling to afford childcare and single parents. Some providers noted no demand for these places, however with the number of working parents and working 2-parent families apparently rising, it may be a lack of awareness that results in these places not being filled.

Out of school childcare provisions, such as wraparound and holiday care, are in extremely high demand across Pembrokeshire for full-time working parents. However, this high demand is not being met with sufficient supply, in part due to a lack of resources and funding available to offer such care. This has been noted by parents, children, stakeholders and the schools themselves. Currently, only 2 childminders provide overnight and weekend care in the county.

Consideration for the development of Welsh childcare settings

Unmet demand extends to the availability of Welsh medium provision, with parents and wider stakeholders expressing a desire for providers that can deliver Welsh-medium childcare. Welsh provisions are currently only available in Pembrokeshire U001, with only 1 Welsh childcare provision outside of this USOA. Providers noted difficulty in recruiting Welsh-speaking staff and requested that more Welsh-speaking courses be made available. Stakeholders also raised concerns around the lack of bilingual provision across the county.

Emerging problems around recruitment and retention

A problem noted in both provider and stakeholder consultation was emerging issues around recruitment and retention of staff. The impact of the pandemic, alongside rising costs, has left many providers struggling to provide sufficient staff, leading to closures across the county. This has been compounded by school-based childcare (such as wraparound care, after-school clubs) not being able to function as usual due to social distancing, placing additional pressures on childcare providers.

Lack of 1:1 provision for children with ALN and disabilities

Many providers noted that there was a lack of sufficient funding to be able to provide 1:1 support to children with ALN, disabilities or complex medical needs. Providers also noted that there was a lack of qualified staff who are confident in supporting these pupils. With percentages of children with ALN in Pembrokeshire higher than some nearby counties such as Ceredigion and expected to rise across Wales over the next few years, the Council should consider how it can best support providers to deliver suitable care for children with ALN. Parents also noted difficulties in finding suitable provision for their children with ALN and this particularly appeared to be lacking in the north of the county.