On the 28th February 2013, the Council adopted a Local Development Plan (LDP) for Pembrokeshire (excluding the area of the Pembrokeshire Coast National Park).

On 24th September 2020, Julie James, AS/MS, Minister for Housing and Local Government (and subsequently Minister for Climate Change since May 2021), wrote to all Local Authorities and National Park Authorities in Wales regarding end dates for LDPs.

‘The provision in the PWA (Planning Wales Act) 2015 regarding the period to which a plan has effect were commenced on 4th January 2016.  These provisions do not apply to LDPs adopted prior to this date.  Plans adopted prior to 4 January 2016 will remain the LDP for determining planning applications until replaced by a further LDP.  For those LDPs adopted after 4 January 2016, the plan will cease to be the LDP on expiry of the period specified in the plan’.

For Pembrokeshire County Council, the current LDP (LDP 1) was adopted on 28/02/2013, which in the context of the Minister’s letter means that it will remain in force until LDP 2 (the replacement plan) is adopted.

Therefore, the part of the Plan title saying ‘up to 2021’ should be disregarded.

The map of Pembrokeshire below can be used to navigate through the Proposal and Inset Maps.

Click on a numbered area of the map below to view the proposal map. 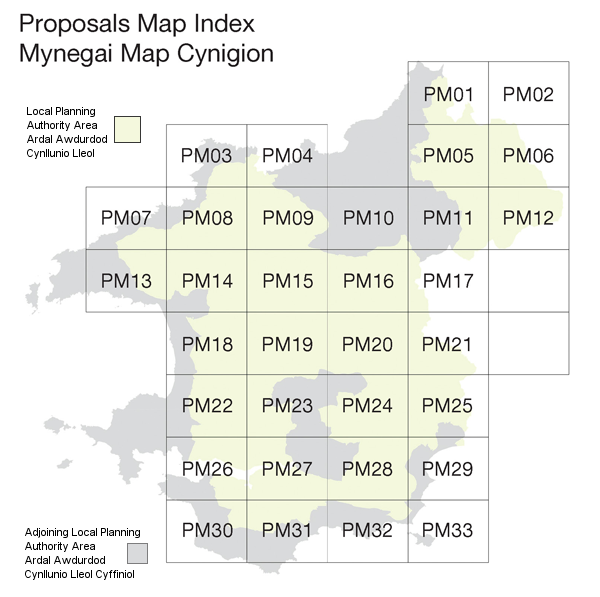